The normal function of the pancreas is discussed here for non-doctors.

The pancreas is a digestive gland, similar to the salivary gland in the mouth.  If you were to take a bite of a sour lemon, the salivary gland would squirt juice into the mouth to balance the acid in lemon juice.  In a similar way, when gastric acid squirts into the first part of the small intestine (called the duodenum) the pancreas quickly squirts pancreatic juice into the intestine to balance the acid in the gastric juice. 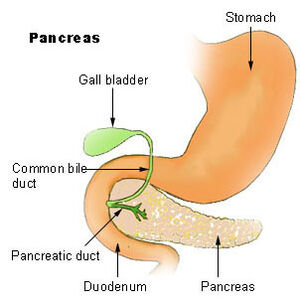 The pancreas has another major function that is not shared by the salivary gland, which is making insulin.  Insulin is a signal (called a hormone) that is released into the blood stream and goes to cells of the body to tell them that nutrients are on the way.  The pancreas makes three other hormones that have minor roles.

Many people do not know that they have a pancreas.  If it is because it is working normally, then that is not all bad.